Before Monhegan Trucking, there was Hiram's Barn where the local horse Matinicus Charlie was housed. Years later the barn was used to store "pot warps"- otherwise known as rope. Although pot warps are no longer stored here, the name has stayed. The rope shed, Monhegan's precusor to Facebook, Twitter, and E-bay, was rebuilt to its former strength and simplicity in 2015. It continues to be a go to for folks for information, connection, and the occassional misplaced mitten.

​MISCA purchased this property on Horn’s Hill in 2009.  It has been a year-round residence ever since.  Due to a family having to leave the island, MISCA repurchased this property in 2013.  MISCA sold the house to Angela Iannicelli, Travis Dow, and Kathie Iannicelli in 2016.  They have made some major renovations and built an addition since their purchase.  Angela and Travis run  their lawn care business out of their home.

​Formerly the Miller property, this house was bought by MISCA in 2006.  Current owner, Alison Hill, who purchased the property from MISCA, is a year round artist.​

This property is slightly less than an acre and is located on Lobster Cove Rd.  The first new construction on a MISCA property, the Weber house was built in 2008. Monhegan Brewing Company opened in 2013 and has the distinction of being the first business built on a MISCA property. Check out their facebook page!

Purchased in 2013 along with the current store, the house is owned by a year-round family and the store is now the new home of  Monhegan Store.

MISCA purchased "The Looks" in the summer of 2016.  The looks consist of two year round housing units on the edge of the meadow; Underlook and Overlook. Both buildings have been year round dwellings since 1985 and the current tenants in both were able to stay in place though the purchase.  Since the purchase, MISCA has updated many major appliances and also replaced the roof on Underlook. There are plans to replace windows and doors among other things. The houses at some point will be sold or a "rent to own" would be offered to the current tenants or other MISCA applicants. Thankfully generous donations and support have made it possible for the looks to stay in the year round community. 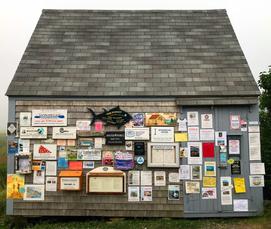 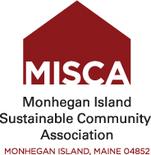